What is Verasity (VRA)?

Verasity (VRA) has been one of the cryptocurrency projects that is promising to revolutionize the way in which video platforms work. More specifically, they want to increase engagement and advertising revenues for video publishers on any video platform. Thanks to this proposal, VRA became a very popular digital currency. Although it did not reach the top 100, it has been a top 300 cryptocurrency and it has the potential to continue growing in the future.

What is Verasity (VRA)?

Verasity is a cryptocurrency and blockchain protocol that is formed by a Proof of View protocol, a proprietary product (Video Player, Adstack, VeraWallet and VRA rewards) and different platforms. The goal is to offer unique ways for video content creators to improve their revenue streams through subscriptions, commissions and other types of Ad revenues.

The main pillars of the Verasity ecosystem are the following:

Verasity’s business model is for video publishers to attract audiences and watch video content and ads. The goal is to reward users for their effort and increase engagement and also monetization.

Throughout the years, Veracity has searched for new markets and they were able to focus not only on traditional video publishers but also on new types of publishers such as esports and gamers. In this way, they were able to create their own tournament platform called esportsfightclub.com.

This platform allowed the platform to control its own environment and launch a new proprietary video player with its own video content and a new type of ads. Additionally, a subscription and tournament fee has also been applied.

Veracity wants to end the fraud that exists in the ad industry. According to some estimations, 65% of the ad clicks are generated by bots. That means that companies are spending close to 65% of their money on bots. This is something that affects all stakeholders, from publishers to advertisers and content creators.

Another important thing to take into consideration about Verasity is that they are also working in the non-fungible token (NFT) industry. Ensuring the authenticity of NFTs is a key thing for companies that are starting to engage in the Non-Fungible token market. Without this information, the incentive to work with blockchain technology and NFTS gets reduced.

This is possible thanks to the expansion of the Proof of View patent to include NFTs. Buyers can be sure that their NFTs are authentic and not fake.

Now, Veracity is focused on generating revenues. These revenue streams can only come if they are able to tackle the $100 billion ad fraud that exists right now and if they provide clear authentication information to NFTs, which represents a market of $30 billion. By addressing a small percentage of these problems, Veracity could start generating the necessary revenues to move the project forward.

Let’s now focus on the VRA token and how it is a key part of the Verasity protocol and ecosystem. This virtual currency is used to incentivize network participants. It is rewarded through ad views and it is also a way for users to earn rewards if they have their VRA tokens staked.

When it comes to price there has been a long way before Verasity was able to reach the prices that it recently achieved. Since it was released and until 2021, Veracity was almost an unknown virtual currency. Most cryptocurrency investors did not have this coin on their radar. However, this has recently changed and this coin could become one of the largest in the future.

Early 2021 was a very positive period for altcoins in the cryptocurrency market. After Bitcoin reached new all-time highs, Veracity was able to massively spike and reach a first all-time high of $0.05 per coin. This represented a price increase of over 6,750% in just weeks. In mid-April, this virtual currency hit its all-time high and a few months later (July) the coin dropped once again below $0.01 for a brief period of time.

Nevertheless, this was not the end of this cryptocurrency. Indeed, a new influx of investors entered the market and allowed the digital currency to move higher once again. In a process that took close to three months, the price of Verasity reached a new all-time high of $0.086 per coin. This allowed VRA to become one of the top 300 cryptocurrencies in the market. However, it was not enough for it to reach the top 100.

One thing is clear, VRA is experiencing the same trend as other altcoins in the cryptocurrency market. There has been a first expansion between April and May that ended with a short-lived bear market. Now, we have seen how VRA reached a new all-time high at the same time as Bitcoin and other digital assets such as Ethereum (ETH), among others.

If the market continues to move lower, we might see VRA reaching the lowest point in over a year. Instead, if it is able to stabilize as other virtual currencies did in the coming months, then we could be part of an accumulation period before another bull run in the future. However, we need to closely track Bitcoin’s price and understand how this could affect Verasity. 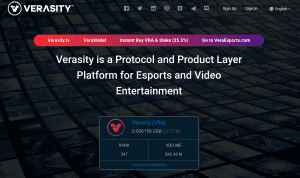 How to buy Verasity?

It is now time to understand how we can buy Verasity in the cryptocurrency market. As we already know, the easiest way to buy a cryptocurrency is by using crypto exchanges. These exchanges would let you deposit fiat currencies (or other digital assets) and purchase the coins you are looking for.

The first thing you should do if you want to buy Verasity is to open a cryptocurrency account. Depending on your region, you will find different cryptocurrency exchanges available. You should choose the one that offers you the best services. For example, make sure that the exchange you selected supports fiat currencies, this would make the whole process even easier.

In order to open a cryptocurrency exchange account, you would only have to share some information such as an email account, password and ID. If you are a larger investor, then you should share additional information before being able to trade and deposit funds.

The second step to buying VRA after opening a cryptocurrency account is to deposit funds. You will have to find a way to deposit funds into the exchange and then purchase VRA. Depending on the crypto platform that you have chosen, you will have different payment methods available. Some exchanges might support credit and debit cards while others might work only with bank deposits and transfers. It is up to you to decide which payment method you use to buy VRA.

Finally, and after depositing funds in your account, we can buy VRA. This is a step that would require you to select the trading pair and the type of order you want to execute. Limit orders will usually be cheaper than market orders. A limit order will require you to select the price at which you want to buy VRA. A market order would get executed immediately at the best possible price.

Where to buy Verasity?

According to data provided by CoinMarketCap, users can buy VRA using KuCoin, Okex, Gate.io, Bittrex, Bithumb, Uniswap, Coinex, HitBTC or BitMart, among others. One of the things you should take into consideration is that there are several trading pairs for VRA, which means that depending on the platform that you use, you would be able to use Bitcoin, Tether, or even Ethereum to buy VRA.

One of the most important things to look for when selecting a cryptocurrency exchange is its volume. At the moment, KuCoin, with the VRA/USDT trading pair, leads the market. It handled a total volume of 56.69% of the total VRA trading volume in the last 24 hours, surpassing other platforms such as Okex or Gate.io, which are recognized crypto exchanges in the market.

How to Store Verasity?

Let’s now get into the details on how to store Verasity. As we already know, storing and keeping our cryptocurrencies safe is a difficult and sometimes challenging task to do. In this case, we are thinking about three types of users that would require different storage needs.

Casual users would only rely on the wallet offered by the crypto protocol called VeraWallet. This is an online wallet that would let users buy VRA, stake it and send it or receive more VRA in just seconds. This is the easiest way if you want to get fast access to this virtual currency. Nonetheless, take into consideration that this wallet would not give you control of your private keys.

VeraWallet is a wallet that employs both cold storage and manual verification for security. At the moment, VeraWallet has never been hacked or attacked. As a casual user, you want to make sure that you have easy access to your coins at any moment of the day. VeraWallet could be the best option if you are in this category.

Unfortunately, there is no hardware wallet offering VRA support. That means that it might be difficult for long-term investors to hold their VRA tokens using a hardware wallet. There are some workarounds that would let users protect their VRA coins using MetaMask and Ledger but they are usually not easy to follow for newcomers to the cryptocurrency industry.

A good thing to do would be to divide the VRA stake that you have across different exchanges and wallets. If there is a problem with one of these platforms, you still have access to most of your coins. In the future, Ledger could offer support to Verasity. Ledger is one of the largest hardware wallet manufacturers in the cryptocurrency market. Thanks to their low-price products, investors are able to keep their coins protected at all times.

Nonetheless, you should also know that exchanges can be hacked. We have seen how millions of dollars worth of virtual currencies have been lost in recent years due to different hacks. Users should definitely analyse whether they want to keep their VRA tokens in a crypto exchange or not.