What is Shiba Inu (SHIB)?

Shiba Inu (SHIB) has been one of the hottest cryptocurrencies in recent months. 2021 is already behind and 2022 is getting ready for what is coming in the future. Shiba Inu could play a key role in the coming months and this could be reflected in its price. However, we should also be cautious about this digital asset.

With 2021 being left behind, 2022 could get ready for new and interesting things. This is why we wanted to create a guide about “What is Shiba Inu?” and tell you all the details you should know about this digital asset. We will go through its main characteristics, we will have a look at its price performance, and how and where to buy it.

What is Shiba Inu?

Let’s start with the basics: what is Shiba Inu? Shiba Inu is right now one of the top 20 largest cryptocurrencies in the world. It was created as an Ethereum-based digital asset that became a clear competitor to Dogecoin (DOGE). This digital currency is also known as the Dogecoin Killer as it shares many of its features and goals.

The founder of Shiba Inu, Ryoshi, said that they were ready to overtake the value of Dogecoin. And this is what happened in the market in 2021. Shiba Inu was able to surpass DOGE in 2021 and became a top 10 digital asset.

This coin also features a Shiba Inu dog, similar to what Dogecoin has already done in the past. Let’s not forget that Dogecoin was released as a meme coin with the logo of a Shiba Inu dog. Hence, we have here two different meme coins that try to compete against each other.

Shiba Inu is also considered to be a clear alternative to Dogecoin. It was created in August 2020 and it is also a coin that is used as a meme coin. Another thing that you should know about Shiba Inu is that this virtual currency became popular thanks to the fact that the founder of Tesla, Elon Musk, published a picture of his Shiba Inu puppy called Floki.

Shiba Inu’s official website claims that they became a decentralized meme token that evolved into a vibrant ecosystem. The Shiba Inu ecosystem is also reliant on two other virtual currencies besides SHIB. These coins are called LEASH and BONE.

An important thing to mention about Shiba Inu is the way in which this virtual currency was created. The founder of this digital asset locked 50% of the total supply of tokens in Uniswap and the other half was then sent to Vitalik Buterin’s wallet address. Buterin then decided to sell a part of the coins and make the largest crypto donation in history to fight Covid-19  in India.

Additionally, the remaining coins held by Buterin were then burned. That means that Shiba Inu has a stronger community, a smaller total supply and it has helped fight the spread of Covid-19 in India.

Let’s now have a look at Shiba Inu’s price and how it evolved throughout the last few years. At the time of writing this article, Shiba Inu is the 13th largest cryptocurrency in the world with a market capitalization of $17.4 billion and a price per coin of $0.00003176.

Since it was released in 2020, Shiba Inu experienced an explosive expansion. Between August 2020 and January 2021, the digital currency was usually traded below $0.000000000020. This is a massively low price for a virtual currency and is highly related to the fact that this coin has a massively large supply.

Things changed in January 2021. The coin experienced its first massive spike in terms of price. The coin surged to $0.000000069 for a short period of time before falling once again to $0.000000008 per coin. This shows how the coin was able to experience a period of expansion and then a correction followed by another period of accumulation, as it usually happens with different virtual currencies. 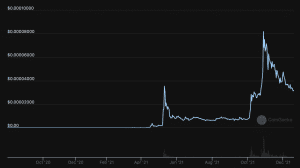 SHIB experienced another price spike in March 2021. This time, the digital currency surged to $0.0000001 for the first time in history. Despite the fact that it experienced a correction of over 50%, the following spike would make SHIB’s first two price increases look tiny.

In May 2021, when Bitcoin reached an all-time high of over $63,000, Shiba Inu hit an incredible $0.0000375 per coin. Again, this price increase was not able to be sustained for a long period of time. It was indeed held for some days and then it retraced by almost 80%.

Between May and October, the virtual currency was then in an accumulation phase with a price relatively stable and with fluctuations no larger than 20%. This allowed investors to invest in SHIBA before the last bull run that it experienced in mid-October. SHIB hit an all-time high at the end of October of $0.00008 per coin surpassing Dogecoin for the first time in history.

From that moment and until today, SHIB has been in a bear trend. It has already restricted more than 50% from its all-time high and it could continue moving downwards if the bear trend in the crypto industry continues. Despite that, SHIB has been a virtual currency that has given many buying and selling opportunities to investors over the last years.

Where to Buy Shiba Inu?

It is now time to see where we can buy Shiba Inu in the cryptocurrency market. The first thing that you need to know is that you can buy SHIB in a large number of cryptocurrency exchanges. Some of these platforms include Binance, Coinbase, HitBTC, MEXC Global, Huobi Global, OKEX, KuCoin, Bitfinex, Kraken, and many others.

One of the important things to know before deciding to buy Shiba Inu is making sure that the exchange that we want to use is available in our country. Creating an account and depositing funds in a cryptocurrency exchange that does not operate in our jurisdiction could be a big mistake.

If you have selected the cryptocurrency exchange to buy Shiba Inu, you should take into consideration whether they accept fiat payments, the trading pairs that they are currently offering and also the liquidity that there is for this specific virtual currency.

Coinbase, instead, decided to take a more conservative approach to SHIB. They are only offering two trading pairs: SHIB/USD and SHIB/USDT. These two trading pairs represent 9.35% of all the trading volume of Shiba Inu in the world.

How to Buy Shiba Inu?

The first step requires you to create a cryptocurrency exchange account. This can be done in just a few minutes depending on the platform that you decide to use. Most crypto exchanges have a standard process for you to create an account before you start trading or buying virtual currencies.

You will have to share an email account, select a password and set up the 2FA. Moreover, some crypto exchanges would require you to authenticate your identity through an ID picture and a possible selfie. This happens in most crypto exchanges around the world and it is a standard process for those investors that want to trade larger amounts of money.

Some other third-party payment processors could be supported by some crypto exchanges. It is up to you to decide how you deposit funds to buy Shiba Inu.

The last step would require you to buy SHIB with the funds that you have deposited. No matter if you have deposited €1,000 or €50, the process will look very similar. You would have to search the exchange section and select a trading pair, for example, SHIB/EUR. Once you have done that, you will have to make a decision whether you want to buy it at market rates or create a limit order that would get fulfilled as soon as the price reaches a certain level.

How to Store Shiba Inu

You should know that cryptocurrency exchanges are not the best option for long-term holders to keep their virtual currencies. The reason behind that is related to the fact that crypto exchanges could get hacked. This happened many times in the past and it affected thousands of crypto users. 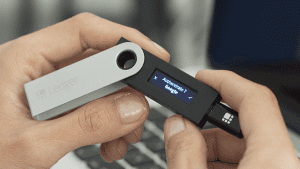 This would let you own your private keys and handle your coins as you decide. Software wallets give you control over your coins. That means that you should be very careful about how you handle your digital currencies. If your computer or smartphone gets attacked by a hacker or a virus, then your coins could be at risk.

Another possibility is by using a hardware wallet. Hardware wallets are physical devices that would give you control over your funds at all times and let you avoid possible attacks from third parties. This is possible due to the fact that the private keys of your wallet will be held offline. Long-term holders or those users that hold large amounts of SHIB should definitely consider getting a hardware wallet.

Shiba Inu and Dogecoin have many similarities but also differences. Both cryptocurrencies were created as meme coins and have attracted large and very active communities. Nowadays, both Dogecoin and Shiba Inu are clear competitors.

Both cryptocurrencies have a Shiba Inu dog as an official logo. Although the colours and layout of each of these logos are different, they both have a dog that works as a meme. Moreover, these digital currencies have very engaged communities that link their virtual currencies to memes on a regular basis.

Both cryptocurrencies used to have a price below $0.01. However, Dogecoin was able to grow and it is now traded above $0.10. None of these virtual currencies has reached $1 yet. Another difference between these two cryptocurrencies is related to the fact that Shiba Inu relies on the Ethereum blockchain while Dogecoin has its own blockchain network that has been created as a hard fork to Litecoin (LTC).

Without any of these two things happening, SHIB holders should know that they would not be able to hold a coin worth $1 in the coming years.