Wells Fargo, one of the largest banks in the world, has included Bitcoin on its investment strategy memo. The company did a one-page summary of the evolution of the crypto market in recent years. Moreover, analysts have also compared the evolution of Bitcoin with gold and the S&P 500.

In a recently released investment strategy memo, Wells Fargo decided to mention Bitcoin and cryptocurrencies. The banking giant explains how 2020 was a “wild and crazy year” and how this is a great fit to cryptocurrencies. The memo explains that Bitcoin experienced a 170% increase this year after growing 90% during 2019.

Moreover, they did a comparison between Bitcoin, the S&P 500 Index and Gold. The chart shared by the company shows that the three assets registered similar gains in the past three years. However, Bitcoin was the most volatile of these assets throughout these years.

The investment memo explains that despite the fact many individuals heard about cryptocurrencies, few have ever bought or used them. Despite the attention they receive, they do not attract lots of investment money. 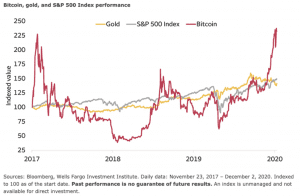 In recent months, Bitcoin has clearly outperformed Gold, the S&P 500 Index and many other assets. While Bitcoin surpassed $19,400 per coin a few days ago, early in March 2020, BTC fell below $4,000. This could be the beginning of a new bull market that could push Bitcoin to new highs and price levels never seen before.

About the future and past of cryptocurrencies, Wells Fargo analysts wrote:

“Cryptocurrencies could become investment-worthy one day, though. Over the past 12 years, they have risen from literally nothing to $560 billion in market capitalization. Fads don’t typically last 12 years. There are good reasons for this – reasons that every investor should hear. As we roll into 2021, we’ll be discussing the digital asset space more.”

It is worth taking into consideration that in recent months, institutional investors have shared their interest in Bitcoin. For example, MicroStrategy has invested several millions of dollars in Bitcoin in the last months. Now they hold almost 42,000 BTC and they want to increase their exposure to the largest virtual currency in the world.

At the time of writing, Bitcoin has experienced a price drop of around 5.50% in the last 24 hours. The digital currency has also a price of $18.187 and the entire market is currently operating negatively.

6 Facts About Ethereum You Didn’t Know

20 Best Cryptocurrency Exchange In The World 2021 [Safe And Trusted]