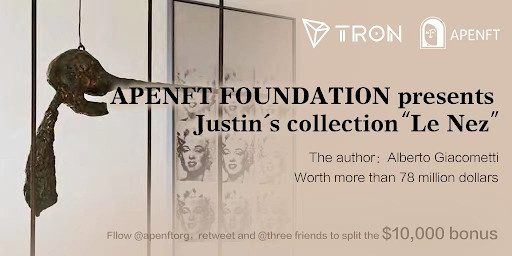 Justin Sun, founder of TRON, won the auction of Alberto Giacometti’s most influential sculpture Le Nez at the price of $78,396,000 and later donated it to the APENFT Foundation. Giacometti’s “Nose” in the Macklowe Collection, can be seen representing postwar existential angst that was voiced by Jean-Paul Sartre, a friend of the artist. The piece shows a head suspended within the bars, the nose further extending beyond the confines of its prison. The features of the sculpture reflect the chassis, barrel, and handle of a gun. “Nose” is considered to be one of Giacometti’s most iconic art pieces. The piece, which was featured as part of the Macklowe Collection auctioned by Sotheby’s, was the second most expensive work of the first half of the collection auctioned on November 15th, hitting the middle of the $70-90 million expected range.

The purchase comes on the heels of other high-profile bids by the blockchain entrepreneur back in March and April. Sun has been the confirmed buyer of Andy Warhol’s “Three Self Portraits”, “Femme Nue Couchée au Collier” by Pablo Picasso, Beeple’s “Ocean Front”, and a collection of NFTs from Pak. These works have been minted into TRON’s TRC-721 NFT format and are now featured as part of the works underlying APENFT’s native NFT token.

After successfully acquiring “Le nez”, Sun made an announcement on his Twitter that he will be donating “Le Nez” to APENFT in hopes that people can be inspired and appreciate the art piece on both online and offline channels.

APENFT has made a name for itself by transforming famous artworks into non-fungible tokens employing the TRC-721 and ERC-721 token formats with help from the Bittorrent File System (BTFS). Now, it is expanding its audience and marketplace’s reach within the non-fungible token universe after listing on OKEx’s exchange. Besides spot trading support for the NFT/USDT pair, OKEx’s Earn feature will deliver NFT staking for an estimated 50% annual percentage yield (APY).

This development follows other noteworthy milestones for APENFT, including the unveiling of the $100 million Art Dream fund in collaboration with TRON to foster growth within the non-fungible token ecosystem. The fund is designed to guide and provide all-around support for artists exploring the possibilities of non-fungible tokens. Now that Sun has minted Le Nez as an NFT and donated it to the fund, it has shed new light on the potential of NFTs.

Commenting on his acquisition and the plan to contribute the NFT to the Art Dream fund, Sun notes, “We truly believe that blockchain technologies can play an instrumental role in delivering greater support for creators and artists, not to mention art enthusiasts and collectors. We want to put art back in the hands of the people, and our collaboration with APENFT is a part of that journey. Demand for non-fungible tokens is strengthening, and that this trend is by no means a passing fad. We are truly honored to be a part of this historic effort to revolutionize the art experience.”

TRON is dedicated to accelerating the decentralization of the internet through blockchain technologies and decentralized applications. Founded in September 2017 by Justin Sun, the company has delivered a series of achievements, including MainNet launch on May 2018, network independence on June 2018, and TRON Virtual Machine launch on August 2018. July 2018 also marked the acquisition of BitTorrent, a pioneer in decentralized services boasting over 100M monthly active users.

APENFT is backed by the underlying technology of the Ethereum and TRON blockchains with support from the world’s largest distributed storage system BitTorrent File System (BTFS), to deliver the mission of registering world-class artworks as NFTs on the blockchain. NFT, as the sole token issued by APENFT, is a decentralized digital currency developed in compliance with the ERC-20/TRC-20 protocol and serves as a proof of stake of the foundation. NFT holders can vote, share profits and participate in community governance.