Bitcoin (BTC) was able to move 15% in the last week and reach $18,400. For Pantera Capital, this price increase is showing only one thing: there is a Bitcoin shortage. According to a recent report released by Pantera Capital, PayPal is already buying almost 70% of the new supply of Bitcoins. If we include Cash App, both customers of these companies are buying more than 100% of all newly-issued Bitcoins.

Pantera Capital Claims There is a Shortage of Bitcoin

Back in May 2020, Bitcoin experienced a new halving event that reduced the new issuance of Bitcoin to 6.25 BTC per block. Each block is mined in around 10 minutes, meaning that per day there are 900 new BTC released to the market.

PayPal announced just a few months ago that it would allow users to purchase Bitcoin directly using their application. That means that around 300 million PayPal customers are now able (or will be very soon) to acquire Bitcoin and other digital assets directly from PayPal.

As Pantera Capital explains, if the growth persists, PayPal alone will be buying more than all of the newly-issued Bitcoin in just a few weeks. Considering that Bitcoin has a finite supply, we can expect to see higher prices in the crypto market.

The report goes on saying that other larger financial institutions could follow the lead of PayPal and Square (Cash App). This would create an even larger imbalance in the crypto market. The only way supply and demand equilibrates is going to be at a higher price of Bitcoin.

At the same time, Pantera Capital believes that Bitcoin is still traded below its ten-year trend. The long term regression would put Bitcoin at around $37,000 when we are now sitting close to $18,400. 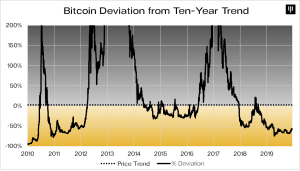 Furthermore, another thing that is worth taking into consideration is the fact that the price of Bitcoin has been rising without an increase in Google searches for Bitcoin. This shows retail traders are still far from entering the market. Furthermore, this can be a good measure to understand the hype around Bitcoin and other virtual currencies.

It is also worth mentioning that there are several large investors that are also placing their funds in the cryptocurrency market. Two of them include Bill Miller and Stan Druckenmiller.

On the matter, Bill Miller stated:

PayPal to Expand its Crypto Trading Solution to the United Kingdom

TON Swap Review: Are We Looking at The Future of Yield Farming?