Bitcoin (BTC) surged by $7,000 after Saturday’s price drop in which the virtual currency fell below $43,000 for the first time since October 2021. Nonetheless, Bitcoin is already being traded at around $49,500, showing that the virtual currency fastly recovered from the recent price correction.

Bitcoin Recovers After Falling To $42,500

Bitcoin, the largest cryptocurrency in the world, was hit this weekend when its price fell below $43,000 for the first time in months. Despite bears calling the end of the bull market, Bitcoin fastly recovered $7,000 in the last few hours, showing that bulls are still there ready to buy the next dip.

El Salvador was one of the countries to buy Bitcoin below $50,000. Nayib Bukele, the President of El Salvador, announced that the country purchased 150 coins at an average USD price of $48,670.

Other cryptocurrencies were also able to recover part of the value lost over the last few days. However, Ethereum (ETH) seems to be one of the least affected by the recent bear reaction of the market.

The second-largest cryptocurrency in the world remained very stable and it only fell for a few minutes below $4,000. At the moment, the digital asset is being traded above $4,200 and it is one of the best performing cryptocurrencies among the top 10. 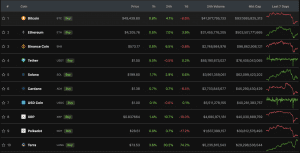 There are some reasons for Ethereum holders to be bullish. According to reports by Zerohedge, UBS considers that ETH options are dominated by a single large 15k strike worth around $400 million in premium. As per UBS, this setup could suggest a reacceleration above all-time highs that could create a gamma-driven surge.

This could be one of the reasons why Ethereum became one of the best-performing assets in recent days, registering gains against almost every single cryptocurrency among the top 10. In the last 24 hours, Ethereum surged by over 8.2%. Luna, instead, registered a growth of 32.7% in 24 hours and XRP surged by 12.9%.

Bitcoin was only able to recover 5% of the price it lost in recent hours. The total cryptocurrency market valuation is up by 6% in the last 24 hours. It is now just a matter of understanding whether Bitcoin and cryptocurrencies could be affected by traditional financial assets.

Let’s not forget that several large central banks around the world are already starting to taper after massive QE over the last 2 years. This could have a negative impact on financial markets, which could then affect digital assets as well.

Arctic Bearz – The NFT That Plans To Save Polar Bears

Sports Betting Continues to Grow Thanks to Bitcoin and Cryptocurrencies