Bitcoin (BTC) on-chain activity continues to grow as the price of the largest cryptocurrency hit new record highs a few weeks ago. According to Binance’s monthly trading report, the crypto market valuation has also crossed $1 trillion for the first time in history during January. Analysts remain bullish about the future of the virtual currency.

January was a very positive month for Bitcoin. The digital currency reached a new all-time high of over $41,500 in some exchanges and other virtual currencies have also moved higher. Binance, one of the largest exchanges in the market informed that the Bitcoin Futures platform generated over $650 billion in volume after a $296 billion figure in December 2020.

As reported by Glassnode, the largest number of active Bitcoin addresses was registered this month. There have been 22.3 million unique addresses sending or receiving Bitcoin during January. This on-chain activity is also related to the price increase the digital asset experienced in recent months. 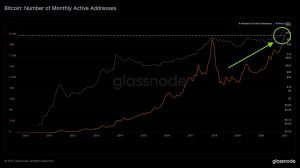 Moreover, it is worth taking into consideration that there has been an increase in interest from larger institutions in Bitcoin. Companies such as MassMutual, MicroStrategy and Square have also purchased large quantities of BTC coins in the second half of 2020.

Furthermore, other recognized investors and entrepreneurs such as Raoul Pal, Elon Musk and Paul Tudor Jones have shared their positive views on Bitcoin and the entire crypto market.

Bitcoin was not the only digital asset with this positive expansion. Indeed, there have been many other cryptocurrencies that registered massive price increases. For example, Ethereum (ETH) has also surpassed its all-time high. Just a few hours ago, ETH hit $1,700, a new record for the second-largest virtual currency.

It might be possible for Ethereum to continue moving higher towards $2,000 as many analysts are currently suggesting. If that happens, it will show the crypto market continues to expand despite a recent pause in the second half of January 2021.

Ether $ETH on a tear to new all-time highs. 2K within sight! pic.twitter.com/1irhD0TBxL

Chainlink (LINK), Cardano (ADA) and Binance Coin (BNB) have also registered massive gains in recent days. Indeed, Litecoin (LTC) is being left behind as the entire market continues expanding. Cardano surged by 59.13% in just a few days, followed by Chainlink with a 13% increase and Binance Coin moving higher by 63.73% in the last 7 days.

Nevertheless, it might also be possible for LTC to reach $200 in the future as the whole crypto market turns bullish once again.

The First Bitcoin ETF Receives Approval by the U.S. SEC