After a fast crash during the night, Bitcoin was able to recover and reach a high of over $62,000 earlier this morning. The virtual currency is now being traded above $60,800 and it shows strength despite the recent volatile days.

Other virtual currencies are following the same trend as Bitcoin. However, Ethereum (ETH) was able to hit a new all-time high after surpassing the $4,400 price level during the European night. According to data provided by CoinGecko, the market is currently operating stably.

Bitcoin and cryptocurrencies have recovered after a fast crash that they experienced on the afternoon of October 28th. The most affected digital asset was Bitcoin, which fell by over 5% in just minutes from $61,100 to $57,800. However, in just an hour, the largest cryptocurrency in the world was again being traded above $62,000.

The cryptocurrency that surprised the market was Ethereum, which reached a new all-time high. The second-largest virtual currency in the world surged to over $4,400, registering a new record. It is worth taking into consideration that Ethereum is lagging behind Bitcoin as BTC has already surpassed its ATH reached in April 2021. 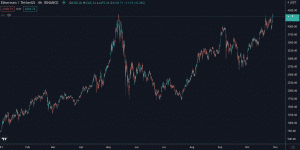 In the last hour, we see that virtual currencies have registered positive small and moderated gains with Dogecoin (DOGE) and Ethereum being the best performing digital currencies with a price increase of 1.4% and 1%, respectively.

Let’s not forget that Dogecoin has recently been in competition with Shiba Inu (SHIB) in terms of market valuation. These two meme coins are now competing for the 9th position in the cryptocurrency market.

Among the top 20, Litecoin has been the best performing cryptocurrency in the last hour with a price increase of 1.5%. This leaves LTC very close to $200 per coin and ready to surpass WBTC and MATIC.

It is now just a matter of time to understand how far the cryptocurrency market could go. Bitcoin could eventually hit new all-time highs as PlanB predicted, it could be traded sideways from the current price level or it could just enter a new correction.

Analysts consider that there is more room to move higher as inflation around the world continues to grow and hit new highs. Therefore, we might have to follow financial trends around the world to have a clear understanding of what can happen with digital assets in the next few months.