According to the cryptocurrency analyst and the co-founder of Blockroots, Josh Rager, there could be a big breakout for Bitcoin in the near future. In a recent tweet, he shared a chart of Bitcoin and stated that if Bitcoin closes above $16,200, it could continue moving higher to $17,000 and create momentum.

“Big breakout for higher-highs on both low time frames and the daily chart. Bitcoin is getting close to some weekly levels near $16,200 which could get rejected. Close above here on the daily and price likely heads to $17k+ with momentum.” 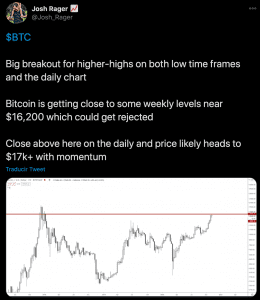 While most of the analysts consider that the digital currency could reach all-time highs in 2021, some others believe that this is still possible this year. At the moment, Bitcoin tried several times to move above $16,000 but it was not able. In order to do so, Bitcoin will have to gather strength and move higher.

Regarding Ethereum (ETH), the second-largest virtual currency in the world, ETH targets are currently above $482 for $500. He has also stated that the last time that ETH was above $500 it was back in July 2018. This was after the bull market experienced not only by Ethereum but also by Bitcoin and the entire crypto market. In 2018, virtual currencies entered a bear market.

Two virtual currencies that could start moving higher include XRP and Litecoin (LTC). These two old players are close to their minimums against BTC. If a new bull market starts for altcoins, it may be possible for these two digital assets to be among those leading the recovery. Despite that, there are some fundamental aspects that are looking bearish for XRP that should be taken into consideration.

KuCoin Launches Crypto Black Friday to Give Away 1,000,000 USDT Worth Of Prizes

6 Facts About Ethereum You Didn’t Know

20 Best Cryptocurrency Exchange In The World 2021 [Safe And Trusted]